Deep down in the ocean the mermaids were desperate. For years and years the humans had kept polluting their beautiful world. Plastic was everywhere. It suffocated the colorful reefs and strangled their plant gardens.

How long could mother ocean and her beloved sea creatures survive?

One day change came to the kingdom under the waves. A tiny mermaid was born with obscure mutations. Where the other mermaids had smooth iridescent scales, the little one was covered in bumps and bubbles. Thousands of tiny plastic particles were embedded in them.

The poor little thing had a sorrowful childhood. The other mermaids viewed her as a living memorial to the demise of their world.

They spitefully called her “Plastique, Plastique” as she grew up like an outcast.

Thus her only wish was to become part of her community. Full of shame and desperation she swam further and further into the deep sea.

Finally, she sank unconsciously to the ground.  Waking up she found herself at a wonderful reef bedecked with vibrant life and murmuring voices were coming from clusters of sea shells. Shyly, she dared to approach them: “Why is everything here so beautiful?”

“Mother nature gave us the ability to transform even waste into pearls.”  The shells replied.

“But look at you! You do have the power! All the bubbles on your body are already transforming plastic into pearls” the shells cheered happily.

Glancing down her body, she realized she had always possessed the power she was longing for.

Travelling on, she discovered she had never been the only one. There were many of her kind, hiding their mutations in shame.

She taught them her new skills and became their queen. From then on she and her mermaids are roaming the seas to free mother ocean.

Plastique came to life as fun project but with a deeper message underneath. Starting point was the idea to use glass cabochons for the scale like part of the corset. These glass pebbles come in different sizes and can be painted with nail polish on the backside. This gives a beutiful jewel like look from the front.

After some testing the question arose :

"How to paint a 1000 glass pebbles with nail polish?" First ask all your friends and queens for their spare nail polish bottles. Then make a lot of salt dough, push all the pebbles in, backside up and paint away.

Invite some friends and a seemingly daunting task turnes into a fun night. 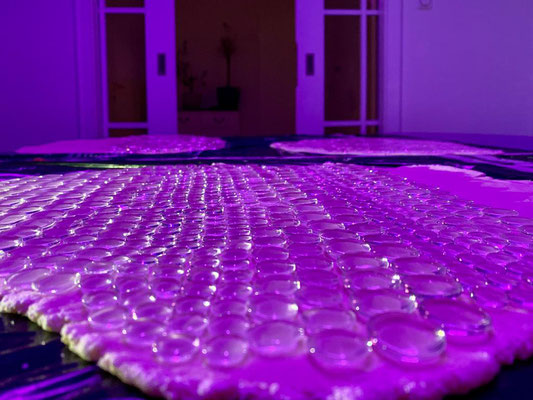 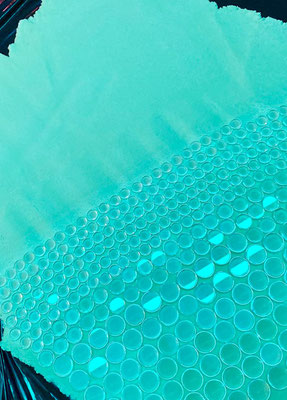 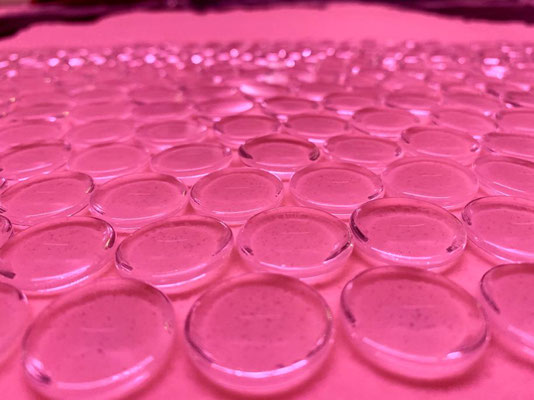 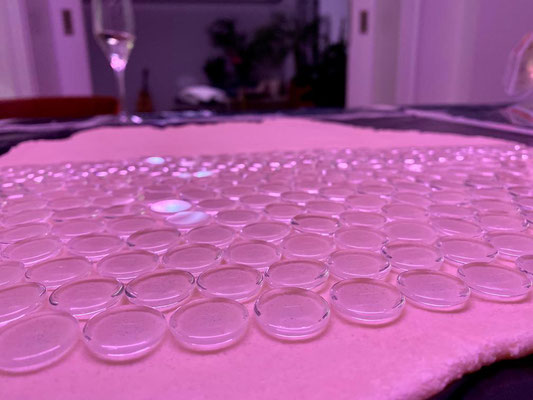 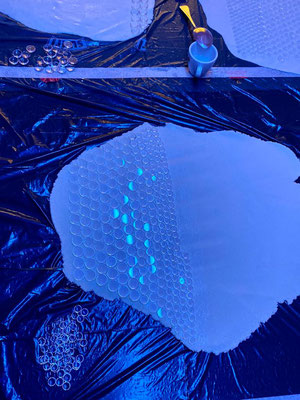 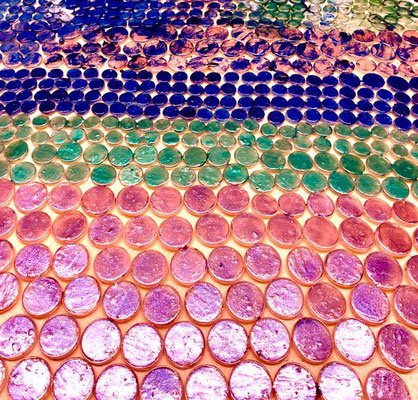 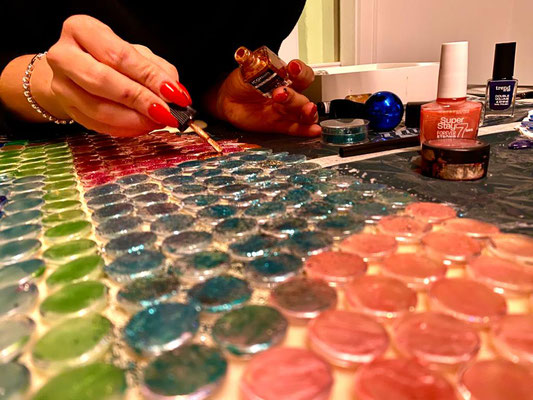 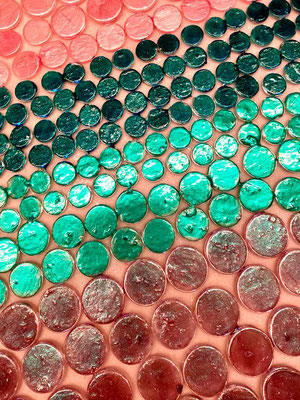 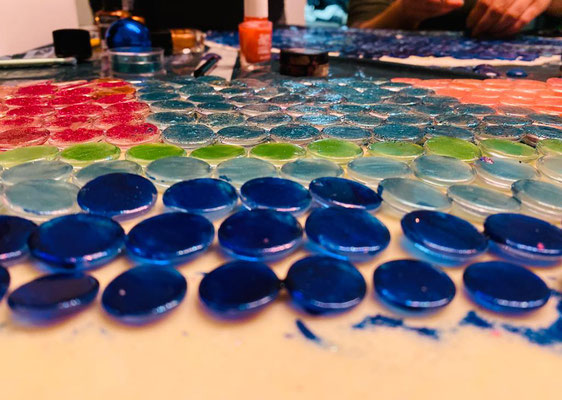 Making the actual corset was the least work intesive part of this project. The pattern was already developed and fitted because I've made a corset for my lovely model before.

The corset with its 11 pattern pieces per side was constructed in two layers of coutil and corset-satin. The layers were roll pinned and put together.

All boning channels were added to the inner side for extra smoothness of the surface. 12 flat steel bones, pre bent over the bust and in the back, and 8 spiral steel bones on the sides. 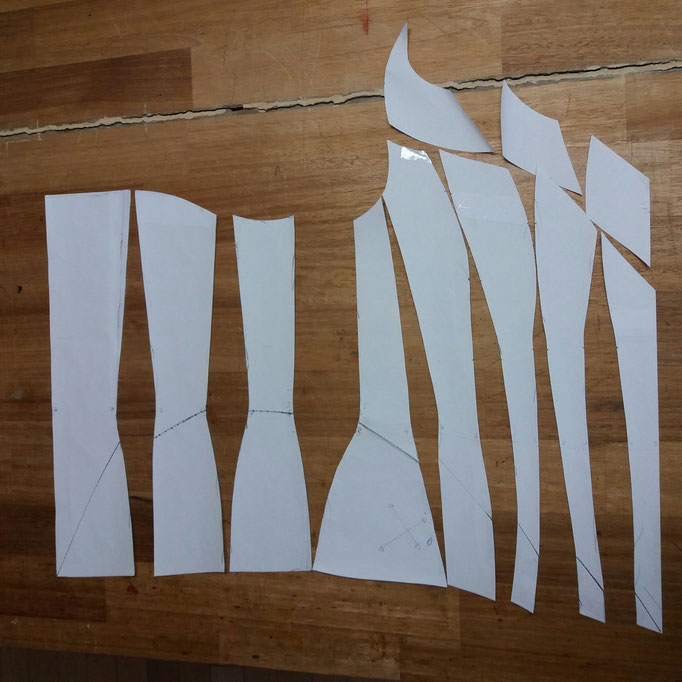 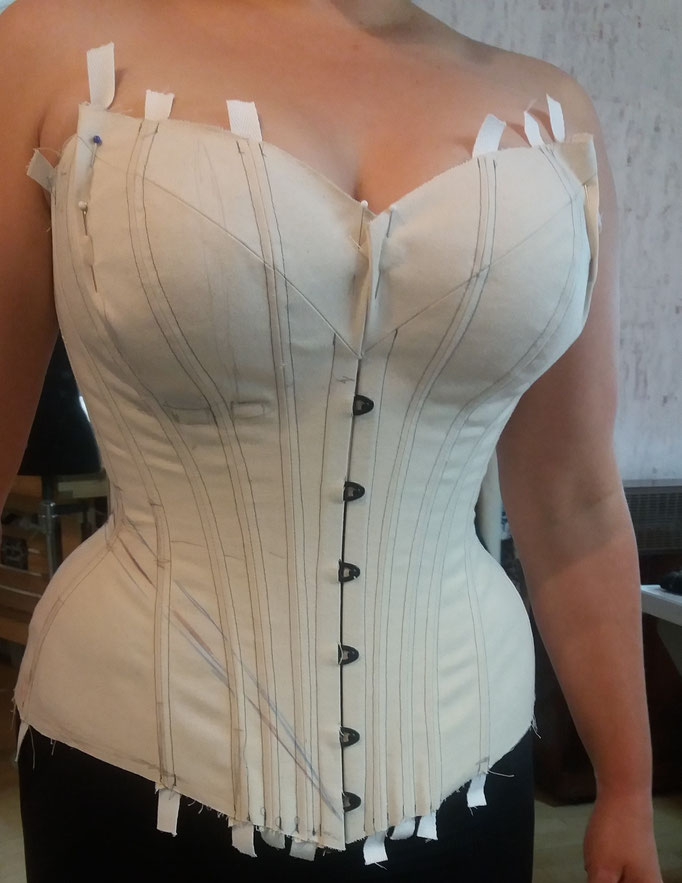 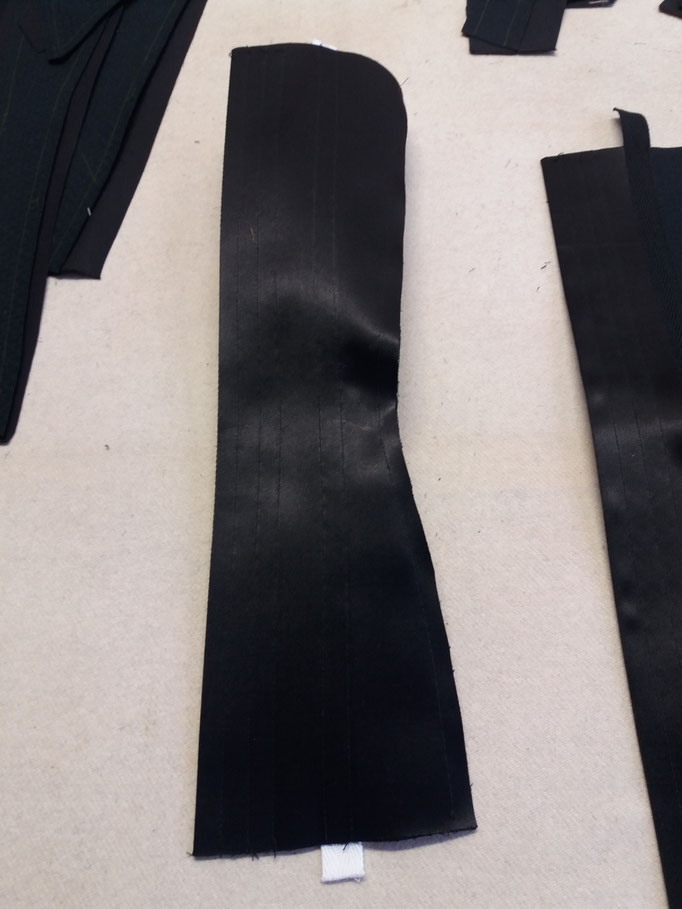 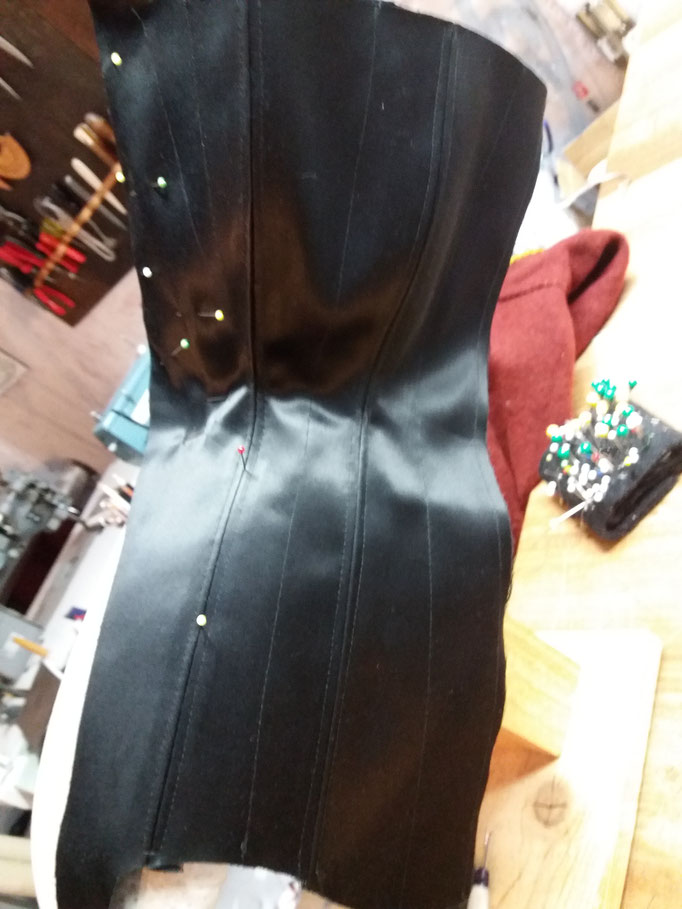 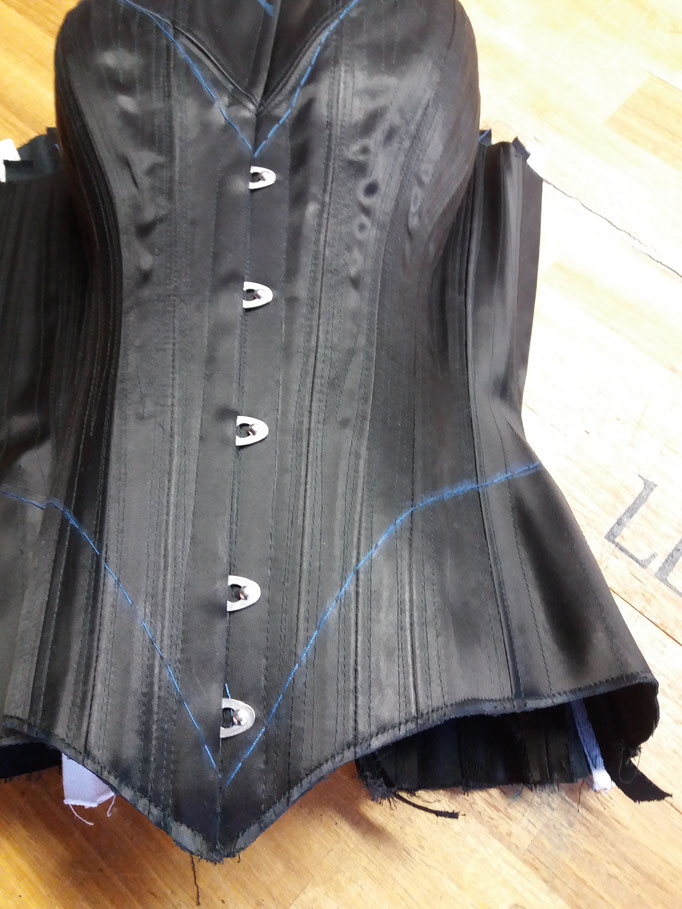 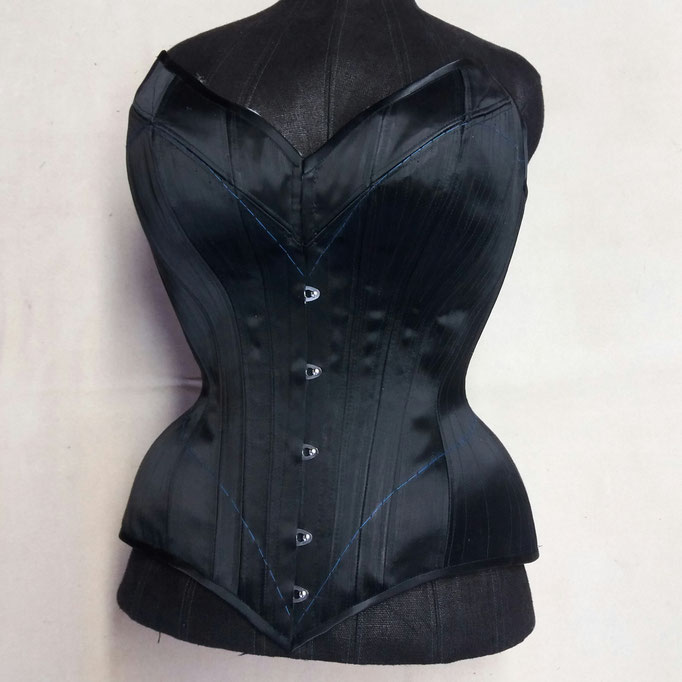 I've wanted to try painting a corset for some time and this was the perfect oportunity. The multy colour gradient effect could not have been achieved  otherwise. It needed three layers of fabricpaint till the surface had the desired effect. 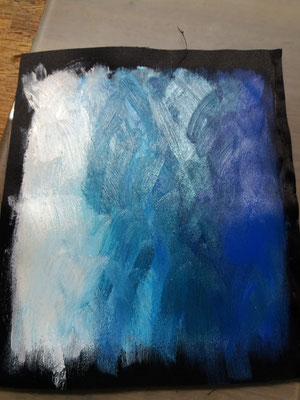 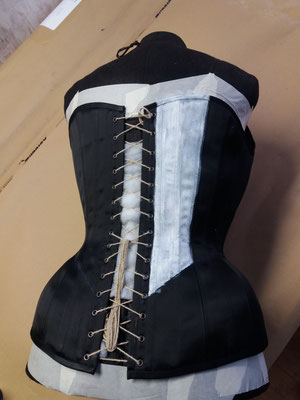 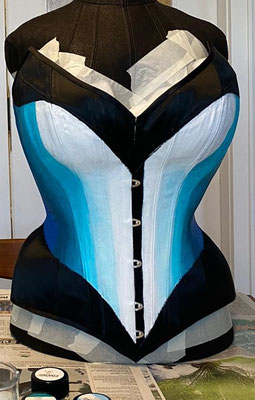 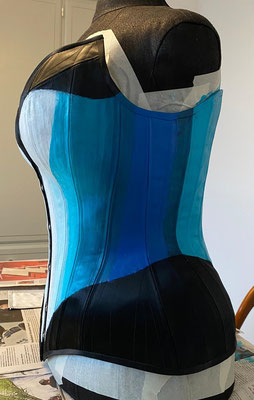 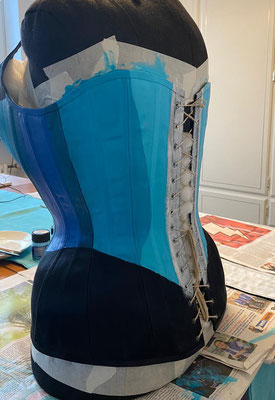 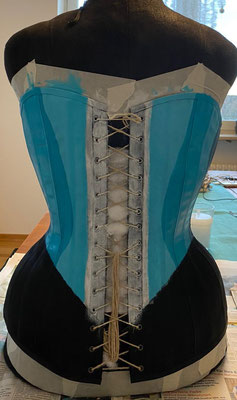 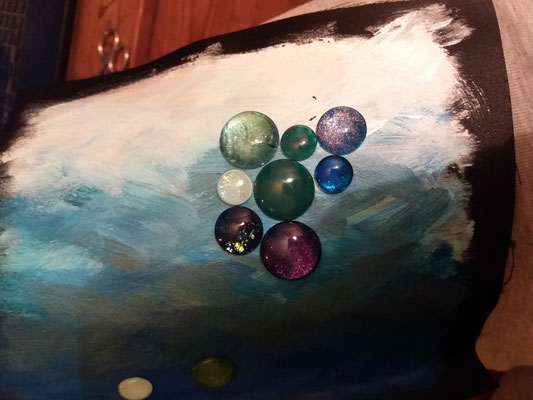 As a last step almost all the painted glass stones where mounted like a mosaic at the bust and hip parts.

This was done with a hot glue gun because no other glue would do the job without disolving the nail polish.

I've invented an aplicator for the stones to save my fingers from burning.

A chopstick and some double sided sticky tape did the trick nicely. I haven't counted the hours it took to get all the little gems attached but it was definitely a task for a paitient mind.

For the skirt the mosaic part was constructed in a similar way, as were the bracelets. 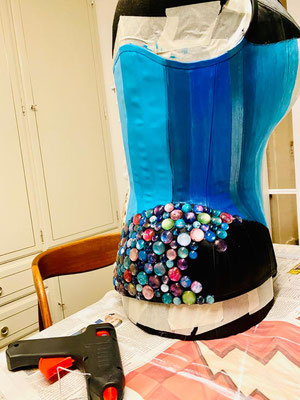 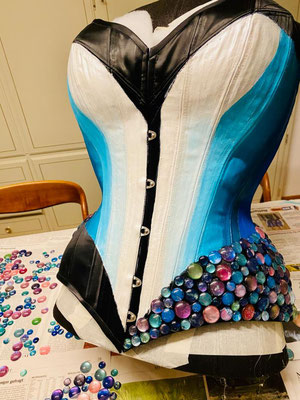 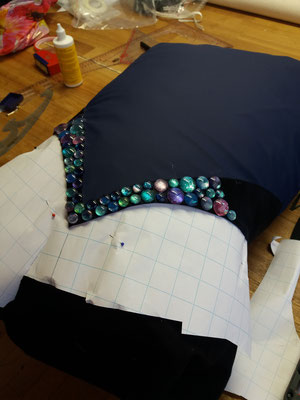 Working with the painted glass pebbles was lots of fun it was like a big mermaid treasure, all glistening and glittering in the colors of the ocean and all mine to play with.